Did you know that if you crowd the mushrooms in the pan, they won’t brown up properly? This is one of the many interesting facts that I learned about these tasty morsels during many periods of trial and error.

When you prepare mushrooms as often as I do, you may notice that they’ll sometimes smell like fish when you open the package. While this can be off-putting, it’s not uncommon. More importantly, it shouldn’t have a negative impact on the dish that you’re making.

The first few times it happened to me, I’m not going to lie — I was pretty apprehensive too. But the more research I did on the subject, the more fascinated I became by this strange phenomenon.

Not everyone has the same take on the subject. The fishy odor is enough to turn many chefs off, as evidenced by this quote:

When your mushrooms start to smell like fish, it’s probably best to throw them away.
Sorry mushrooms.

When you’ve finished reading my article, you should know:

Just for good measure, I also researched various types of mushrooms to find out as much as I could about these valuable fungi.

For example, the button mushroom doesn’t seem to keep for as long as its cousin, the baby bella. And in case you don’t already know, baby bellas take their name from the fact that they’re smaller versions of portabellos, which are often used as a meat substitute.

In my personal experience, there are several possible reasons for this phenomenon. Let’s take a look at the most likely ones.

The first reason why a mushroom might smell like fish is the most obvious: It’s no longer fresh.

When food spoils, it can take on a fishy aroma. This is especially true of meat products, but certain vegetables can be affected as well:

Did y’all know mushrooms smell like fish when they go bad? 🍄🐟

That’s why it’s crucial for every chef to be able to tell when they’re dealing with ingredients that have gone bad.

The smell of fish is caused by large amounts of bacteria setting up camp on the surface of the food. Mushrooms contain a great deal of moisture, which attracts bacteria. That means they’ll go bad more quickly than less moisture-rich veggies, like carrots.

The Foodsguy recommends tossing your ‘shrooms in the garbage as soon as you detect a hint of fish:

This smell is caused by an overwhelming amount of bad bacteria. All ingredients do have some bacteria on their surface. Once the bacteria start multiplying too much, they start showing noticeable signs of their presence. A fishy smell is one of them.

That said, just because a mushroom smells like fish doesn’t mean that it’s gone bad. As you’ll come to learn, there will typically be other signs of spoilage as well. If the mushroom isn’t displaying any of these other signs, then it’s probably fine, no matter what it smells like.

Certain mushroom varieties will smell like fish even when they’re fresh. There’s one, the lactifluus volemus, that’s commonly known as the “fishy milkcap.” That should tell you all you need to know about the mushroom’s odor.

The smell of fish is drastically reduced after cooking — at least in most cases. But if you find it objectionable, you should steer clear of the following types of mushroom:

One obvious — albeit less common — reason why a mushroom might smell like fish: It was stored next to fish, or at least a seafood product. You can head off this issue by keeping the ‘shrooms away from any ingredients that have a strong odor. That includes fish, shellfish such as mussels or lobster, or pungent aromatic vegetables like onions.

For more tips on how to store mushrooms properly, see the separate section below.

Can I Use Them if They Smell Like Fish?

We don’t recommend using them if they’re showing any of the other signs of decay that we’ll discuss in the next section. However, if you’re sure that the specimens are fresh, then cooking them can help to eradicate that fishy odor.

As we’ve discussed, some varieties might smell slightly fishy to begin with:

It’s a good idea to give them a good sniff right away, just so you’ll have a basis for comparison if you suspect spoilage later on.

How to Tell if Mushrooms Have Gone Bad

If you’ve never had to deal with mushrooms that have gone bad, you might not recognize the signs. Here are the ones to watch out for.

When a mushroom is fresh, you may be able to detect a hint of moisture on the exterior. But if it’s overly damp or slimy, then it’s outlived its freshness and should be discarded.

That slime on the surface denotes the presence of bacteria. You might be able to salvage the ‘shrooms by rinsing them off and drying them well using paper towels. But if they’re overly slippery — to the point where it’s hard to hold on to them long enough to slice them — then it’s time to throw them out.

You can learn more about salvaging slimy specimens by watching this video:

As we’ve discussed, a fresh mushroom contains a lot of moisture. As it ages, it will dehydrate, losing its plump appearance and turning shriveled and wrinkly. A few wrinkles are nothing to worry about, but if they’re all shriveled up, don’t bother to cook them.

If you hold on to the mushrooms long enough, they’ll darken up in spots — and eventually all over. This is more obvious on light-colored varieties, but it can happen on the darker portabellos and baby bellas as well.

When it’s fresh, the mushroom will feel firm to the touch. If it feels spongy or squishy, or as if it’s gone hollow inside, then discard it and move on.

Obviously, if you notice any spots of mold on the mushrooms, you shouldn’t use them. These fuzzy green, blue, or yellow patches indicate that the ‘shrooms have gone well past their expiration date.

Last but not least: Why do my mushrooms smell like fish?

If they didn’t smell like fish when you bought them but now they do, they’ve probably gone bad. While this is unfortunate, it’s better to toss them at this point than to move forward with the recipe.

Possibly, as long as the fish smell came from the mushroom itself and not spoilage bacteria. If you’re still smelling fish after you’ve cooked them, then you should probably throw them out. You can attempt to mask the smell of fish by using butter or olive oil in the pan. Neutral oils like canola or peanut have high smoke points, but they won’t contribute any flavor.

If all this talk of butter has inspired a craving for toast, click here for information on the best cool touch toasters out there.

This guide to the most popular mushroom types should help you find what you’re looking for the next time you shop.

An immature variety, the button mushroom might also be referred to as the “white mushroom.” With their mild flavor, they can be used in various recipes — omelets, pizza, sauces, stews, you name it.

These specimens are also excellent when stuffed with bread crumbs or another rich filling. By clicking here, you’ll learn what to serve with this appealing dish.

Cremini is another term for the popular baby bella, which has more flavor than the button mushroom. They have an earthy flavor and a firmer bite, making them a good choice for soups. Stuffed creminis also make delicious appetizers, especially for large parties. If you need an electric ice crusher for your next gathering, check out the tips in this article.

Portobellos are renowned for their rich, savory flavor and chewy texture, which allows them to stand in for meat in certain recipes. For best results, scrape away the dark brown gills before cooking.

Light brown caps and pale, slim stems set shiitake mushrooms apart. Their deep umami flavor will liven up a stir-fry in no time. Note that while you can eat them raw, it’s best to cook shiitakes beforehand.

As the name suggests, these specimens have a delicate appearance reminiscent of an oyster shell. The flavor is mild and slightly sweet, lending subtle notes to soups and sauces. Note that these tend to go bad more quickly than their hardier brethren.

Since the ‘shrooms will release moisture during their stint in the fridge, it’s a good idea to store them in something absorbent. A paper bag lined with paper towels is your best bet.

As they say over at Fueled With Food:

Over time, mushrooms release moisture. It’s best to store them in something that absorbs this moisture.

Don’t store them in the store-bought container, as these are typically made of plastic and will hasten spoilage. Also, try to keep them out of the crisper drawers — they have plenty of moisture on their own and won’t benefit from the humid environment.

There’s no need to wash them before you start to cook, unless you notice a slimy texture. Instead, gently wipe them off with dry paper towels to remove any excess dirt.

By following these tips, you can help to keep your mushrooms fresh, which should prevent them from smelling like fish as a result of spoilage.

If you want a practical demonstration, check out this video:

How Long Do Mushrooms Stay Fresh in the Fridge?

Fresh whole mushrooms should keep in the fridge for 7 to 10 days. Once you’ve sliced them, they’ll only keep for 5 to 6 days, so try not to do any prep until you’re ready to start cooking.

After a week has passed, you’ll probably start to notice telltale signs of spoilage. Note that cooking them will buy you another 3 to 4 days, but the cooked slices won’t last as long as the raw ones did.

If you’re wondering how to reheat your stuffed mushrooms after cooking, you’ll find ideas in this article.

Do some varieties spoil faster than others? Sometimes. Baby bellas, which have a firmer texture, seem to keep longer than buttons or shiitakes. But this might have more to do with the storage conditions than the specimens themselves.

Can I Freeze Mushrooms?

You can freeze your ‘shrooms to preserve their shelf life, but the technique works better if you cook them first. We would recommend steaming or sauteing the slices, then separating them into portions before putting them in the freezer.

Try to use the frozen mushrooms within 6 to 8 months. Longer storage periods can lead to freezer burn, which will affect their texture.

Check out this video for even more storage ideas:

Dehydrating is another option. You can learn more about that in this article.

If they already had a fishy scent when you bought them, then that’s probably just what that type of mushroom smells like. If not, the smell might mean that the product has passed its expiration date.

By learning the difference between the various mushroom types — and familiarizing yourself with their respective scents — you should be able to tell whether the smell is a sign of spoilage or a hallmark of the mushroom itself. 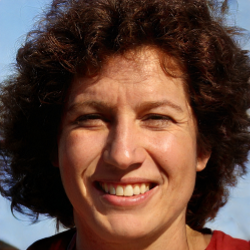